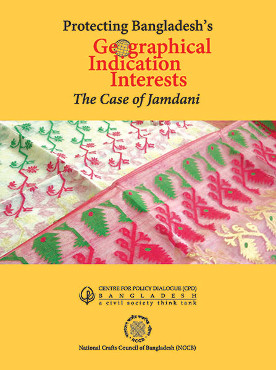 This publication emerged from a collaborative initiative of the Centre for Policy Dialogue (CPD) and the National Crafts Council of Bangladesh (NCCB).The study taken under the initiative deals with the issue of operationalising the newly enacted Geographical Indication (GI) law in Bangladesh (Geographical Indicative Products (Registration and Protection) Act 2013) with associated rules to safeguard the patent of Jamdani, one of the finest crafts deeply rooted in Dhaka.

GI as defined by the Trade-Related Aspects of Intellectual Property Rights (TRIPS) of the WTO refers to “indications that identify a good as originating in a territory or a region or locality in that territory, where a given quality, reputation or other characteristic of the good is essentially attributable to its geographical origin.

”Thus the study seeks to identify ways and means to protect the patent right of Jamdani exclusively for Bangladesh through historic evidences. An Annex to the report, included in this publication, elaborates on the current day techniques, tools and workers and actors involved in the different stages of Jamdani production.Part B of the publication presents a report on the dialogue organised under the initiative in June 2014 that brought together legal experts, relevant government officials, eminent fashion designers, trade, textiles and craft experts, academics and representatives from the media and the civil society.CPD-NCCB is currently engaged in follow-ups regarding the operationalisation of the GI Act in Bangladesh.

It is hoped that this publication will help the readers in understanding the depth of interest for Bangladesh in protecting such traditional crafts, and will stimulate them in contributing to the effort.